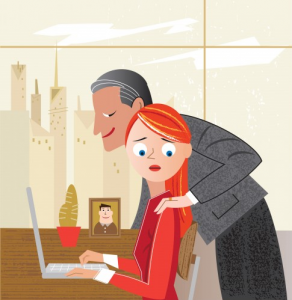 The basis of the recommendation was threefold:

(a) The Magistrate Judge found that the harassment was not unwelcome, severe or pervasive:

(1) The Magistrate Judge found that Plaintiff never actually rebuffed the harasser, who was her supervisor.  “Plaintiff testified: ‘I don’t recall exactly what I said. I might have said ‘stop’ laughingly and ‘go away.’ I don’t know how I reacted.’”   Plaintiff also pretended the conduct did not happen.  She did not say anything to the alleged harasser.  (There was also testimony that the workplace was pretty loose, with frequent horseplay among the employees.)

(2) Defendant argued: “Plaintiff claims that she was harassed by a manager because of sex, and other employees (both men and women) were favorites and targets of the manager who harassed her. None of the events complained of by Plaintiff were severe or pervasive, or extreme or atrocious.”

(3) Defendant also argued that the decision-maker on Plaintiff’s termination was not her supervisor, the alleged harasser, because he only notified higher management and only wanted to write a warning letter; it was a higher-level manager who decided to terminate Plaintiff, and the termination was upheld through all internal “Guaranteed Fair Opportunity” levels.

(4) The Magistrate Judge rejected plaintiff’s argument that the harassment affected her job performance, because she had excellent performance reviews prior to her firing allegedly for misconduct, and until oral argument had presented herself in the litigation as a stellar employee.

(b) The Magistrate Judge found that plaintiff never complained of the harasser’s actions against her until she filed her EEOC charge.  She knew of the company’s 24-hour toll-free alert line, and used it to complain anonymously of non-actionable favoritism towards a female co-worker with whom the supervisor was having a relationship, but never used it to complain of harassment against her.

(c) The Magistrate Judge found that defendant took reasonable and adequate steps to prevent harassment and to address any problems.  It had written policies prohibiting sexual harassment, and the alleged harasser was trained on its employment policies and completed training on sexual harassment awareness.  In addition, “Defendant’s Alert Line provides employees with an anonymous way to report employment issues or complaints, and someone in the human resources department investigates issues raised through the Alert Line.”

The Magistrate Judge found that there was no competent evidence to the contrary.

The district court rejected the Report and Recommendation as to the sexual harassment claim and denied defendant’s motion on that claim while granting it on all other claims.  There is a decent chance of success on appeal on some of the dismissed claims, but I am writing because of the important to other lawyers of the denial of summary judgment on the harassment claims.  The court held that Plaintiff made an adequate showing that:

(a) the conduct was severe or pervasive (“The plaintiff asserts DiPalma made sexually explicit comments to her, improperly touched her, and made offensive comments to her.”);

(b) Federal Express was not entitled to the Faragher–Ellerth affirmative defense:

(1) because Plaintiff suffered the tangible employment action of termination (even though the court granted summary judgment as to the sex discrimination claim as to the termination); and 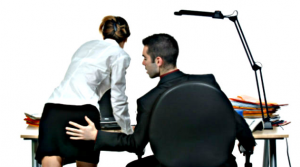 (2) because the supervisor/alleged harasser “was involved in the decision to terminate the plaintiff’s employment and was the person who informed the plaintiff of this decision”;

(c) the conduct was imputable to Federal Express because there was evidence of the alleged harasser “engaging in harassing behavior toward other female employees.”  The court cited Fourth Circuit authority on the legal effect of this evidence on imputation of liability to the employer for harassing behavior by employees:

“As for imputation, the plaintiff cites, in her objections, Paroline v. Unisys Corp., 879 F.2d 100 (4th Cir. 1989), vacated in part on a different issue,900 F.2d 27 (4th Cir. 1990) (per curiam).  In Paroline, the Fourth Circuit stated that “[i]n a hostile environment case under Title VII, we will impute liability to an employer who anticipated or reasonably should have anticipated that the plaintiff would become a victim of sexual harassment in the workplace and yet failed to take action reasonably calculated to prevent such harassment.  An employer’s knowledge that a male worker has previously harassed female employees other than the plaintiff will often prove highly relevant in deciding whether the employer should have anticipated that the plaintiff too would become a victim of the male employee’s harassing conduct.” Id. at 107.